A Neglected Point about COVID-19 Testing by mikethemadbiologist
Thursday March 26th, 2020 at 1:05 AM

There’s an excellent New Yorker article about the failure to provide enough tests to detect COVID-19. Here’s a point I haven’t seen made elsewhere, but that is really crucial (boldface mine):

The public-health-laboratory network was never intended to provide widespread testing in the event of a pandemic. To offer tests to anyone who wanted them, as President Trump did, on March 6th, was always going to require commercial testing facilities to come on line. Still, the three-week delay caused by the C.D.C.’s failure to get working test kits into the hands of the public-health labs came at a crucial time. In the early stages of an outbreak, contact tracing, isolation, and individual quarantines are regularly deployed to contain the spread of a disease. But these tools are useless if suspected cases of a disease cannot be tested. The void created by the C.D.C.’s faulty tests made it impossible for public-health authorities to get an accurate picture of how far and how fast the disease was spreading.

The key thing, however, is that carbapenem-resistant organisms were very rare initially. By contrast, a public health lab couldn’t handle even the daily AST requirements of a single large city without diverting other services.

This is why the testing failures, which at a broad level can be laid at the Trump administration’s feet, is so devastating. It’s not just that we lost the chance to contain this virus, it’s that we lost weeks in which the test could have been broadly distributed–and to be clear, this wasn’t just due to reagent problems, but also regulatory ones, problems that an involved president could have removed (the executive branch routinely defies Congress and the law, yet, when speed was of the essence, FDA regulators were able to prevent approval of desperately needed testing).

Finally, this is what happens when people running the country don’t understand the capacities of the institutions they purportedly run.

How to keep frequent handwashing from destroying your hands... by peter@rukavina.net (Peter Rukavina)
Thursday March 26th, 2020 at 1:01 AM

Very early on in her life with cancer, Catherine benefited from a call with an anonymous “cancer buddy,” a veteran who knew the drill.

One piece of useful advice she got was to up our family handwashing game: keep the soap stocked, get a supply of cloth towels to use once and then launder, leave hand sanitizer by the front door. And make sure everyone washes their hands, all the time.

When you wash your hands in a life or death way, as we’re all doing now, they can start to shrivel up and die in a way that exceeds the capabilities of regular moisturizers.

Fortunately, I found O’Keeffe’s Working Hands. You only need a tiny bit of it—indeed the instructions on the tube command this—to return your hands from the dry wastelands, and they don’t end up feeling greasy or sticky.

You can find O’Keeffe’s in most pharmacies these days. A tube lasts me 6 months. 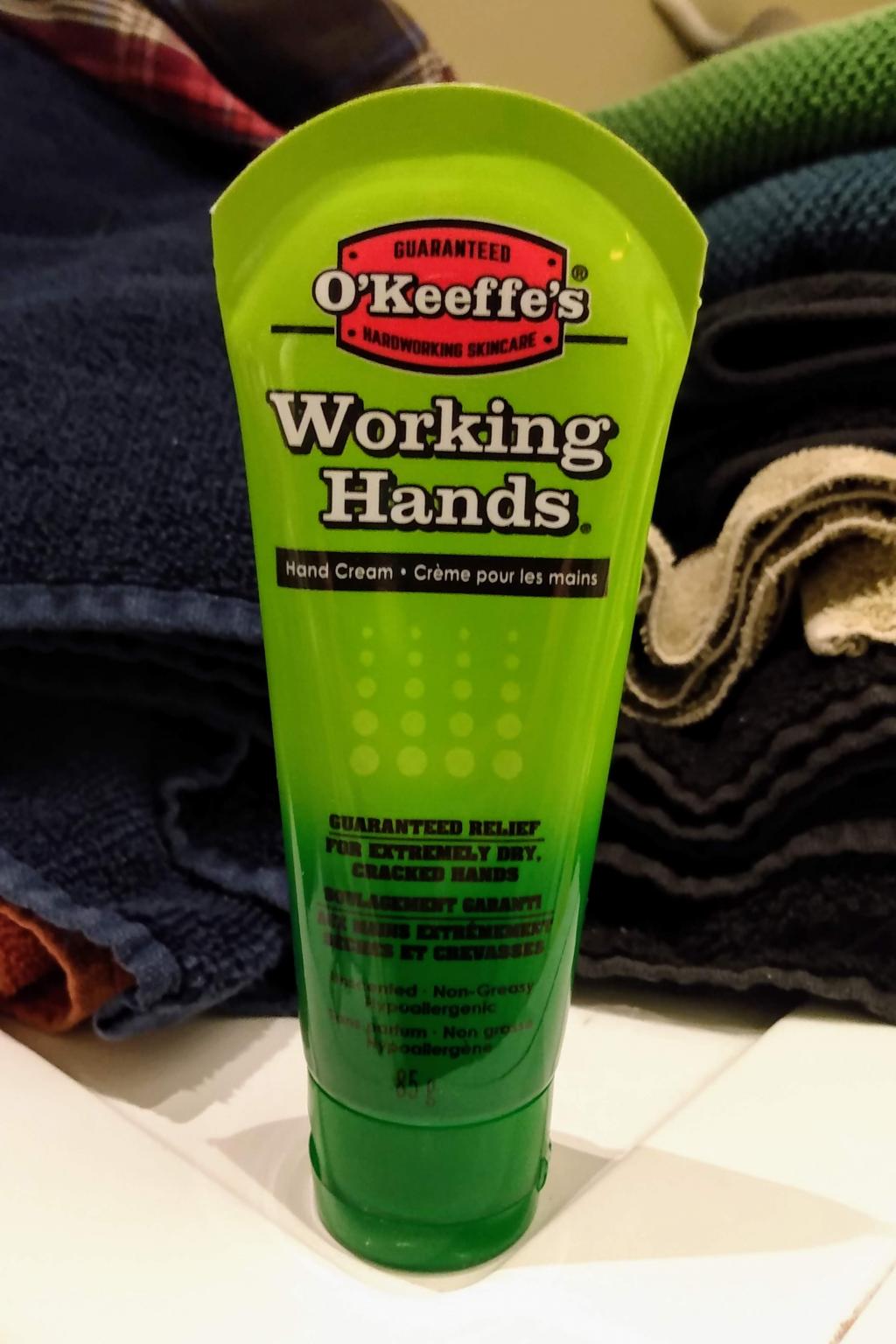 Our family was helped greatly by the Strongest Families program in 2017, and emerged as believers in their tele-mental-health approach that allowed us to receive coaching, as a family together, at home.

If you’re an adult experiencing anxiety and nervousness, you may want to look into the Conquer Anxiety and Nervousness program that Strongest Families now offers:

This program educates adults about anxiety and guides them as they learn skills to overcome their anxiety, excessive worry and how to cope with major life stressors. This program provides adults with a manual or access to a secure website, videos, relaxation audio clips, daily anxiety tracker, a supporter guide, and weekly telephone support from a coach. Adults can receive weekly telephone coaching support through either one on one coaching, or through our group-based program with other adults who share similar challenges. This program is effective at decreasing anxiety and stress; and increasing confidence and independence.

You can self-refer, and the program seems tailor made for these times of both increased anxiety and social distancing.

thestubborntortoise: sedfierisentio: my new favourite thing is...
Thursday March 26th, 2020 at 12:55 AM

my new favourite thing is italian regional presidents and mayors absolutely LOSING IT at people violating quarantine. here’s a eng subtitled compilation for y’all. (the president of campania region; the mayor of messina; the mayor of bari; the mayor of gualdo tadino; the mayor of tutolo.)

Because we are all complete morons

THE BLOG IS COMING FROM INSIDE THE HOUSE

Hello from indoors! Where I have been for…four days? Five days?  It all blurs together. You would think I’d enjoy 24/7 sweatpants and bralessness and not taking public transportation to a soulless office building, but it turns out I am a little crabby about having no choice in the matter. Well not about the bralessness. Nothing to be crabby about with that. But right now I am missing (not in order):

It is a big enough house that LT and I (and Aaron) can have separate work zones, although we do hear each other’s conference calls. And I hear the exasperated sighing he makes while he works and he hears the little profane exclamations I tend to make when I work. No one is mad about any of it. Yet.

All of the college visits we lined up for spring break are canceled. I guess spring break is in essence canceled, if you think about it. School is no more, and when will they go back? WHO KNOWS. Will the kids take the SAT on time? MAYBE. PREP ON YOUR OWN. Teachers are giving out assignments and Aaron is doing them, but of course it does not fill up the days. This week can be as slack as it needs to be, though. We all need to adjust and get the hang of this, so, son: play your shooty games in between spurts of chemistry and trigonometry. I do not care.

JUST NEED TO GET THIS OUT

I do not deal much with political news and opinion. I vote. I stay informed at a very basic level thanks to helpful news-digest emails, NPR’s Up First podcast, and (god help me but it’s true) Twitter and Reddit. But I do not want to watch debates or talk about politics beyond maybe a “what the FUCK” over beers. This is partially because it is very boring to me and partially to save my brain from Doomsville.

The 2016 election was bad, of course. For some reason I had gone to a bar to watch returns (and I NEVER do things like that) and ended up with bartender-purchased tequila shots and, later, weeping in an Uber. But at some point after that, as a constant stream of putrid and despicable nonsense spilled out of the president, and as we got close to another presidential election, people seemed filled with a righteous We Will Defeat This Motherfucker energy. Being my sideline self, I was not a huge part of that—other than spitefully donating to pro-choice and refugee-rights causes every time I got mad—but it felt sort of good. Get Trump out. Have a nice election night this time. Even if it’s not a candidate we’re thrilled about: at least the short-fingered vulgarian would be gone.

I no longer have any of that energy and believe that the Democrats will absolutely fail and there will be four more years of batshittery. I hope to be wrong but fear I am not. And now I just hope Trump dies. Just dies. Just straight up strokes out. An iron fist squeezing all the foul-smelling juice out of the mildewed Nerf ball he has for a brain. Rolled out of the White House on a gurney with 24/7 “grave condition” news updates until they turn off the machines. Melania can have some wicked-boring funeral couture, there can be a riderless horse or a coffin decorated with flags and eagles or whatever these tacky bastards want, and I will not be a ghoul and literally dance in the streets but I will raise my High Life and smile.

This is wrong and I know it is. You can tell me I am going to hell for wanting this, or just inviting a bad energy into my mind (I do not believe the first thing but sort of do believe the second thing, limp and lame as it sounds), but sorry. It cannot be helped.

WOW THAT GOT DARK

—mimi “wow that got dark” smartypants

When I drive through my boyhood neighborhood, where there are blocks and blocks of working class family houses circa 1950s with square front lawns, I can tell where all the cripples live. Their houses are the ones with the crazy, winding wooden ramps on the front.

Because nobody builds a ramp on their house just in case they or someone who lives there becomes crippled or so some crippled visitor can get in. Hell, if anybody tried to put a ramp on their house just in case somebody might need it someday, the neighbors would probably think they’re crazy. A petition would probably start going around. If there’s a homeowners association involved, they’d probably fine the homeowner with the proactive ramp up the ass. Neighbors and homeowners associations can accept ramps as long as there’s a good excuse for them. But suppose Neighbor X builds a ramp on their house and so neighbor Y, as a display of sympathy that somebody who lives there is now crippled, brings over a batch of homemade chocolate chip cookies. And suppose Neighbor X then says thanks a lot but there’s nobody crippled living here. We’re just being proactive. Imagine how betrayed Neighbor Y will feel.

And the only time anyone builds a house from scratch to be fully cripple accessible is if a known cripple is going to live there. And that’s dumb because people become crippled every day. There’s a guy who lives upstairs in my building whom I hadn’t seen around for a while and then one day I saw a guy who looked exactly like him hobbling with a cane and his arm was shriveled up like he had a stroke. So I figured either he had a stroke or he has a twin brother who had a stroke. It turns out that sure enough, the guy who lives upstairs had a stroke, which is why I hadn’t seen him. And I said to myself well hell, I bet that guy’s grateful that by dumb luck he ended up in a building that’s cripple accessible. It’s a helluva lot easier adjusting to life as a cripple when you don’t have to call the fire department to haul your ass down the stairs every time you want to leave the house. The guy in who lives upstairs could be a spokesman for that.